More in the Soweto Theatre project: 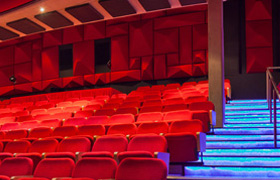 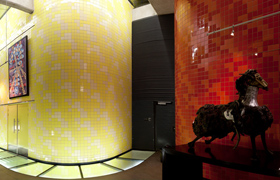 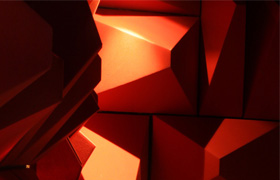 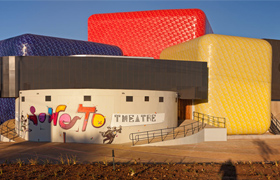 The building was placed along an existing pathway through the site and turns the back to the street maximising the advertorial capacity of the necessarily solid forms of the theatre.
Its most transparency and openness faces the walking person with the main foyer opening towards the amphitheatre and the park surrounding it.
The Y-shaped layout of the 3 theatre venues rose from a need for maximum economy of space at the back-of-house. Two fortress-like walls contain all ancillary spaces, holding within them the 450-seater auditorium and the 2 black-box venues _ 180-seater and a 90-seater. Their curved profile upwards gave the extra floor plate necessarily for administration and mechanical rooms.
The sky-lit ‘green room’ is the heart of the actors’ domain. Various other performance areas are designed around the theatre, turning everyone around it into either a spectator or a performer, including the delivery yard facing the street corner: the delivery of props becomes a watchable performance. The foyers, the inside one and the outside one, are interchangeable as performance spaces.
So patrons feel on stage, or can have the exposure to what it is like to be part of the lighting crew as they walk on the lights’ bridge across the inside foyer.
The outside foyer, an essential element of the Gauteng glorious summer weather, using the mnemonic material textile of festivals and ‘the circus is in town’ _ is a tent.

Lighting, natural and man-made, was manipulated to make the theatre boxes glimmer like jewels in daylight and at night. The light fissures surrounding the theatre boxes, above and below, allow natural light into the depth of the ambulatory arcade and make the boxes glimmer day and night. The walking across the canyon of light into a performing room prepares your spirit to the experience.
Orientation: a system through light and vision was created using a transparency from outside-in and inside-out, offering security and belonging.
Ventilation: an economic forced fresh-air system uses the chimneystack effect of the quadruple lobby volume for ventilation and smoke control.
Anti-graffiti system: to offer a base for alternative entertainment (skating) at the same time supplying a wall for graffiti advertising shows.
The tent uses the main auditorium as an anchor, its cables crossing the glass curtain wall. All it’s rigging for stability and the supports of the glass curtain wall appear like stage rigging.

… never conceptualized as an object… but it is being read as one. An icon cannot be made, or found; it may become one. The forms and space within were created in a functional way. Their interior connective tissue of ambulatory lobbies exposes the passer-by to the interior.
The basket-weave pattern of the directly applied porcelain tiles glistens with the sun’s rays and glimmers at night as car lights reflect off it. This enticing effect is parallel to an African dancer with its shimmering torso and flashes from body adornments. The building was intended to be ‘naked’ with no pochê-space or main covering, like an object might have; it exposes all its contents, from everywhere you can identify each of the theatre boxes and from within re-orient your-self to the exterior. So, it is the antithesis of an object.